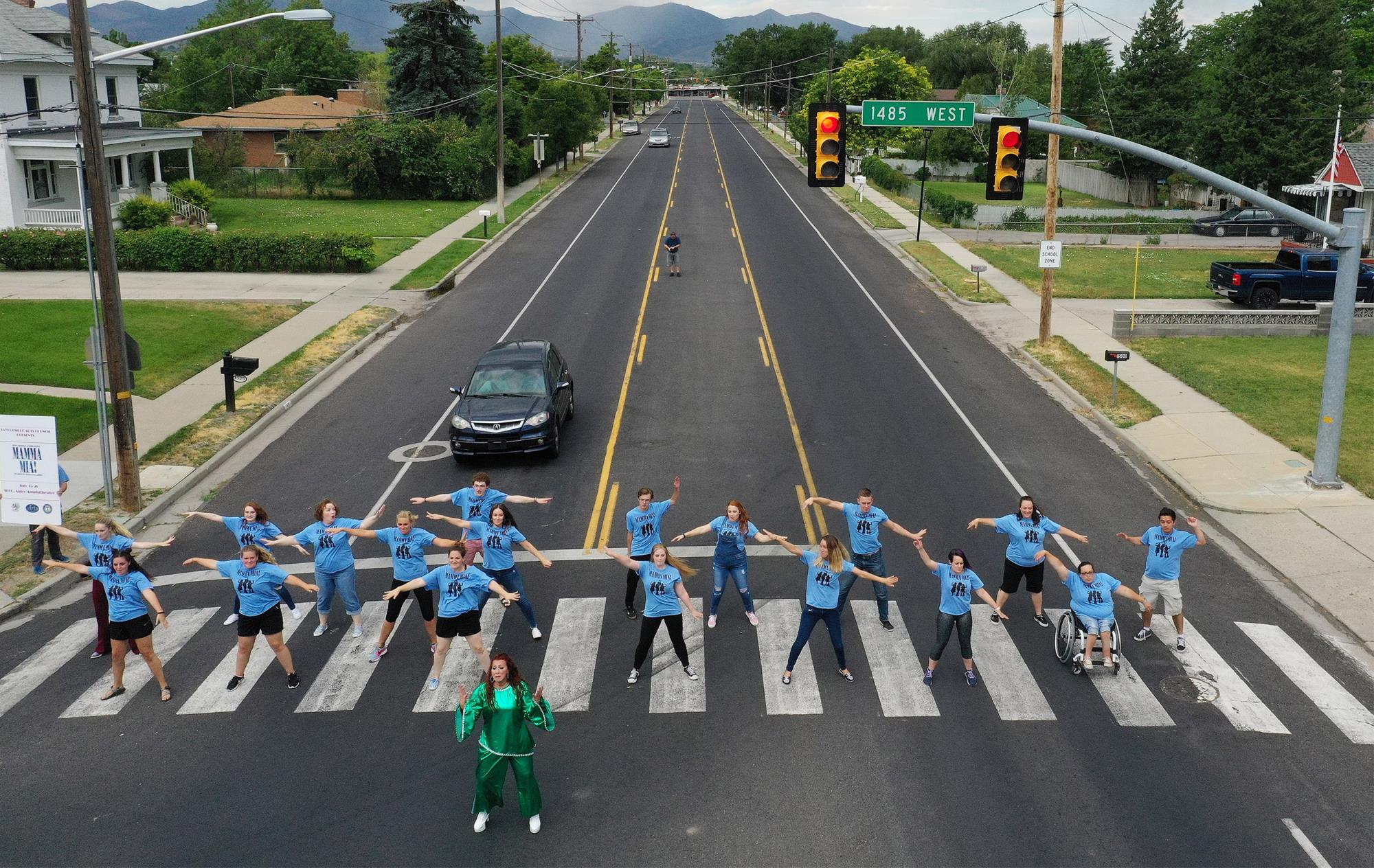 The Taylorsville Arts Council's production of Mama Mia! put on at the end of July was a huge hit. The show drew an audience of 200-300 people each night.

In advance of the production, the cast gathered in costume the Saturday morning before to stage a "Crosswalk Musical" at the intersection of 4800 South and 1485 West. Some in their disco garb and platform shoes, and others dressed in Mamma Mia! T-shirts, they danced and sang in the intersection.

The event mimicked the ‘Crosswalk the Musical’ productions by actor/television host James Corden on his “The Late Late Show” on CBS. Like Corden’s skits, the Taylorsville Mamma Mia! cast assembled at the curbside before sprinting out into the road as the light turned red. With traffic stopped at the light, the Mamma Mia! cast then sang and performed songs from their show in the crosswalk before the light turned green again.

With traffic ready to go, they hurried back to the side of the road before another impromptu performance at the next change of the light. Drivers stopped at the intersection were treated to the brief song and dance, smiling and laughing appreciatively. Neighbors also gathered outside their homes to see the traffic interludes and snap a few pictures.

"I'm so pleased with how it turned out and the reaction of drivers and neighbors there," said Taylorsville Arts Council Vice Chair Susan Holman. "Everyone really seemed to be enjoying themselves and having so much fun. We wanted to perform in the crosswalk as a way to give a sneak peek of the production."

See the Deseret News' article and photographs from the event. 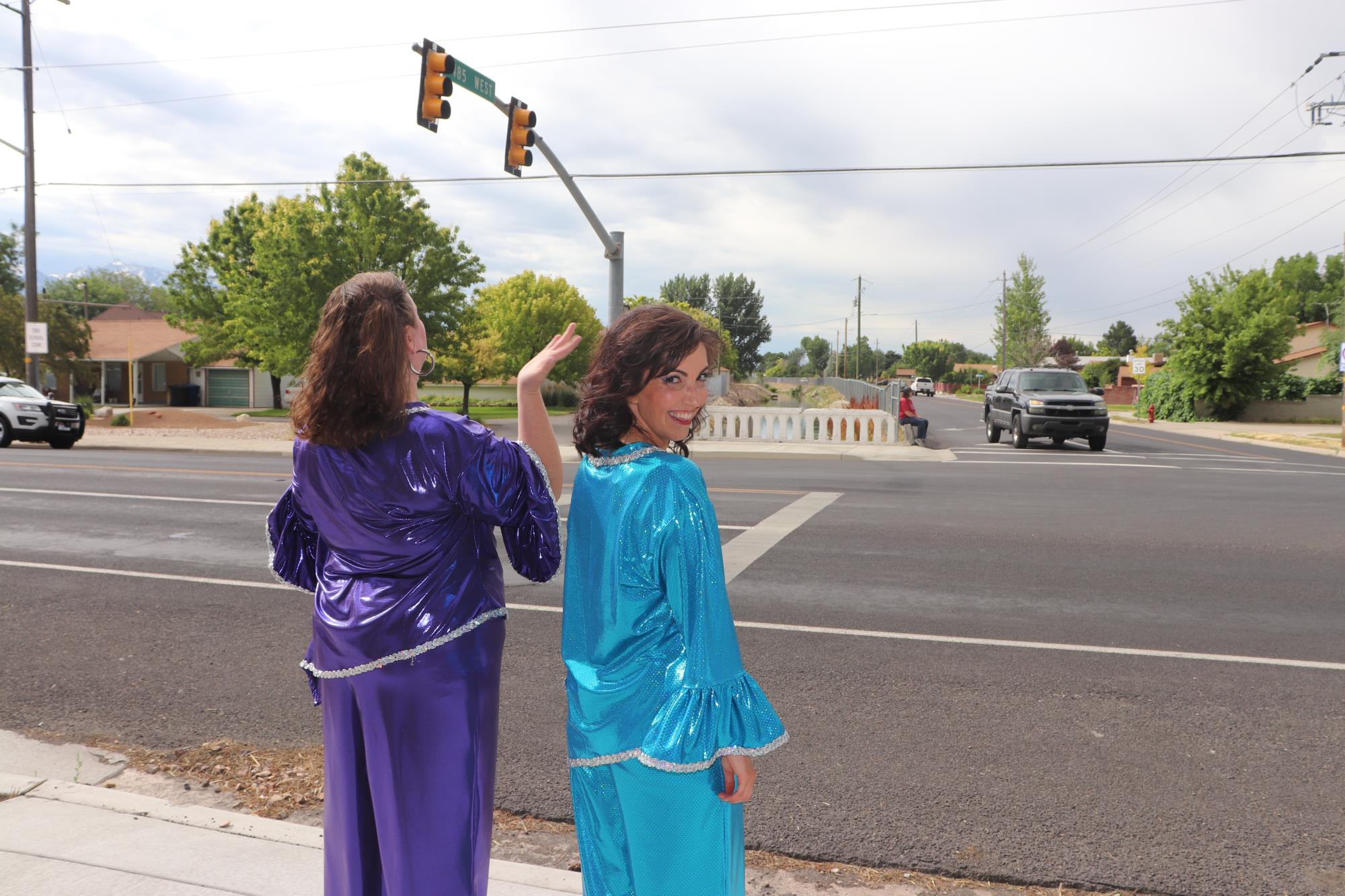 The cast obtained permission from the Taylorsville Precinct of the Unified Police Department to perform in the crosswalk on Saturday, where Taylorsville UPD had a patrol car stationed at the intersection for safety. In fact, at the conclusion of their hour-long performance at the crosswalk, UPD officers got into the act themselves.

Turning on their lights and sirens, they pretended to chase the cast members from the crosswalk with their vehicles. In character, the cast members ran down the street, screaming and waving their arms, as the officers cars approached.

The Taylorsville Arts Council presents a musical production each summer. This year, the cast practiced for months, starting with special dance clinics in March and April. Featuring the music of ABBA, the show ran July 15-20, including one night that was a sing-along performance. 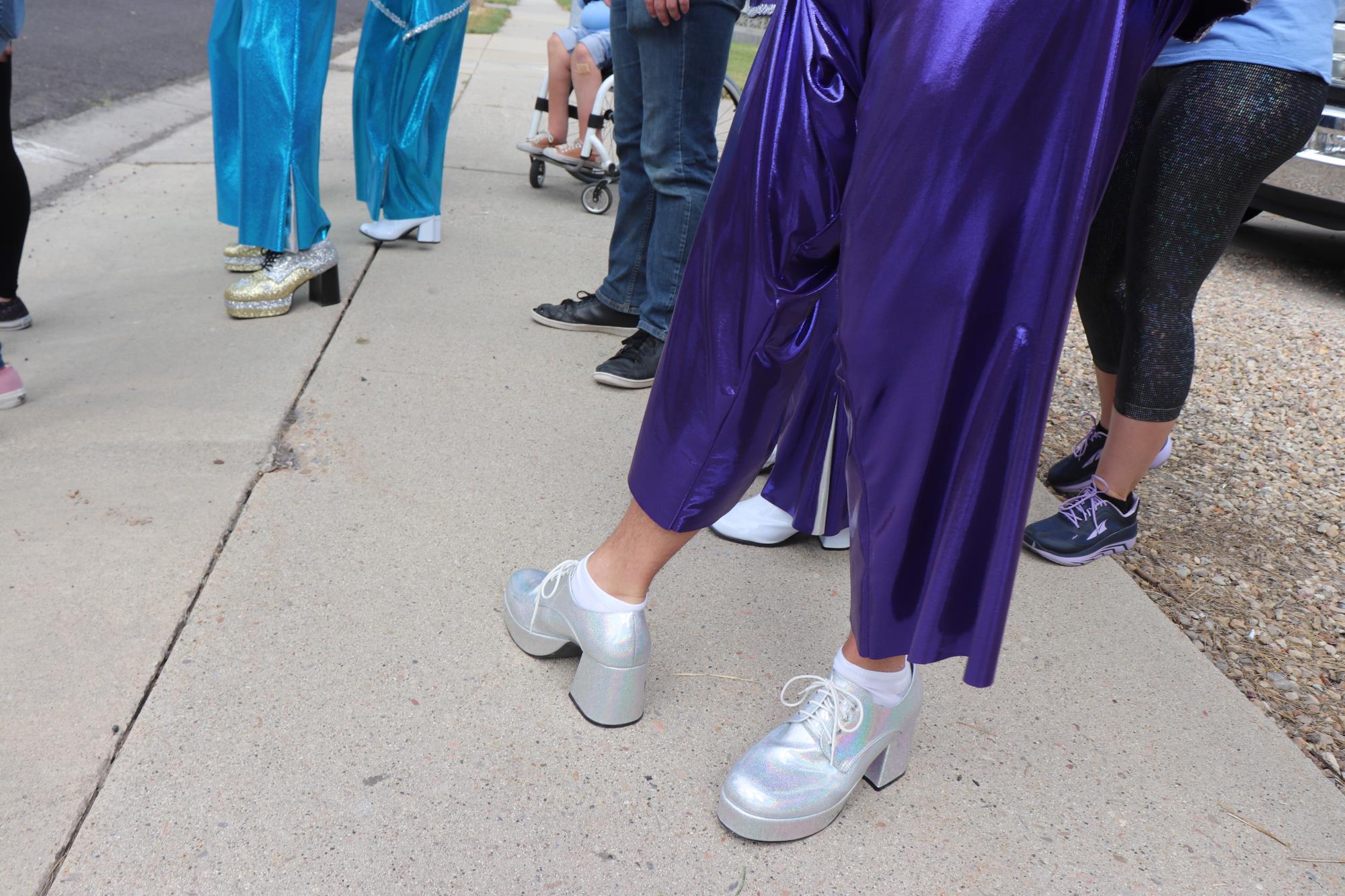 A big thank you to the Taylorsville Arts Council and all the cast members!

See the names of the full cast here. 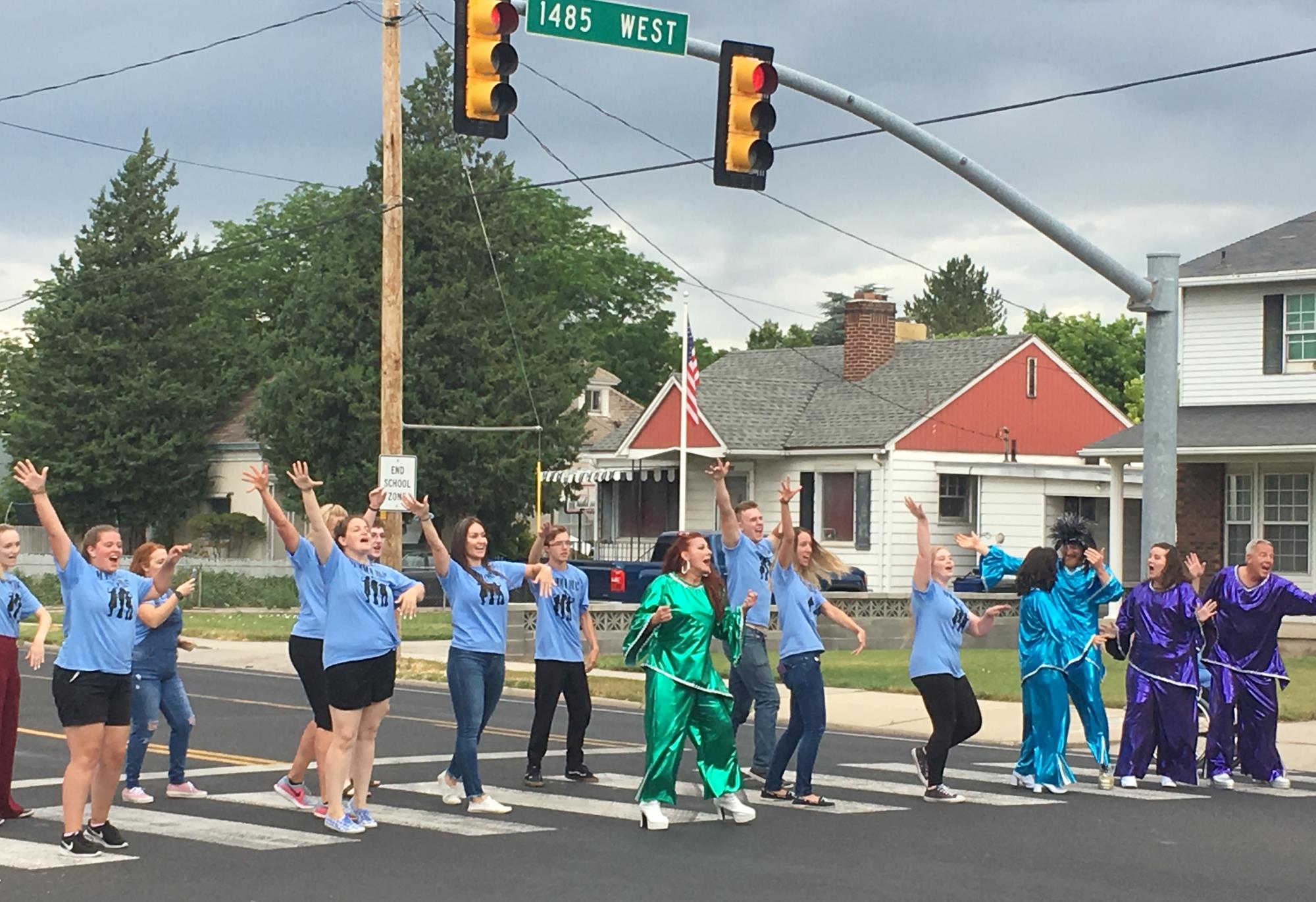 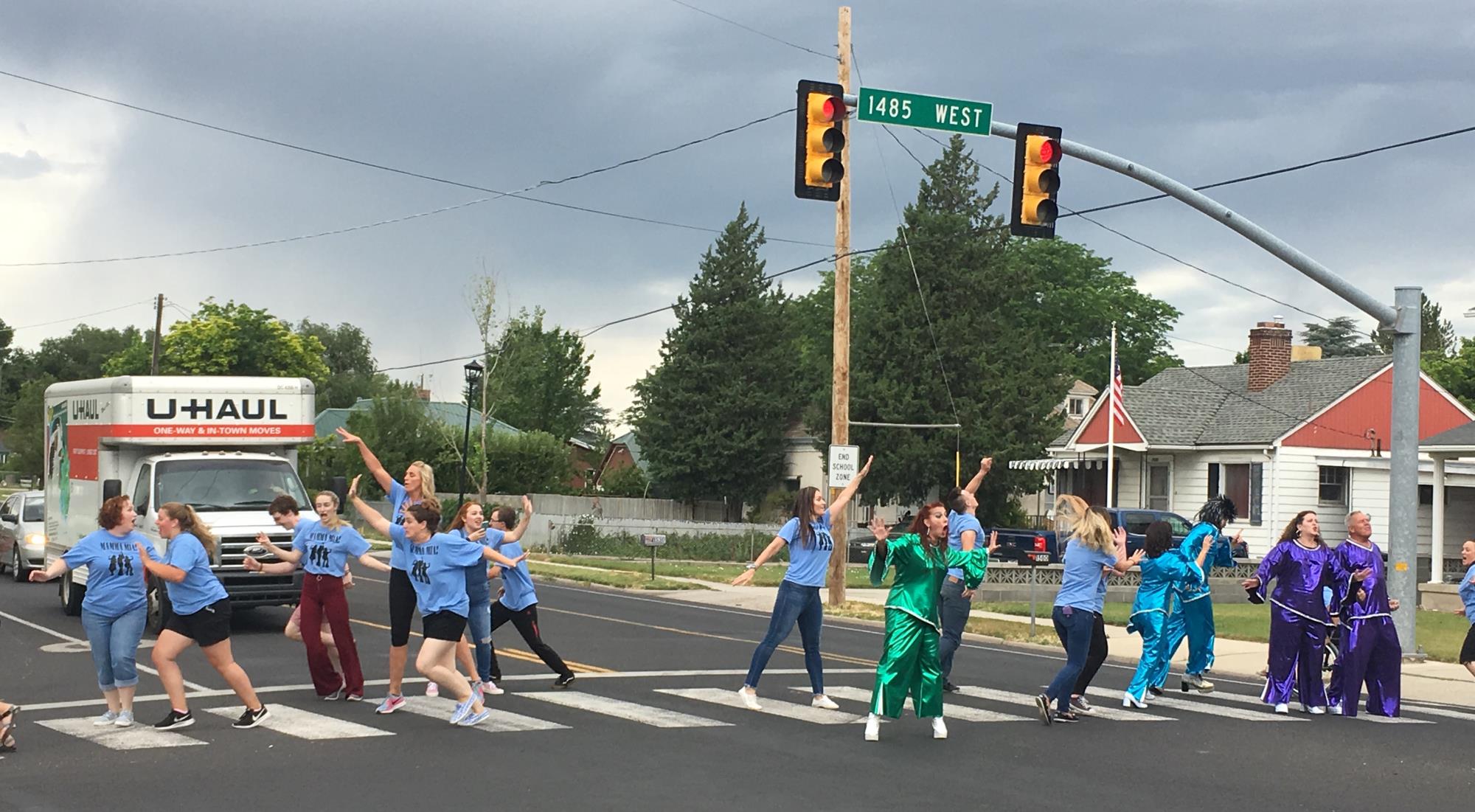 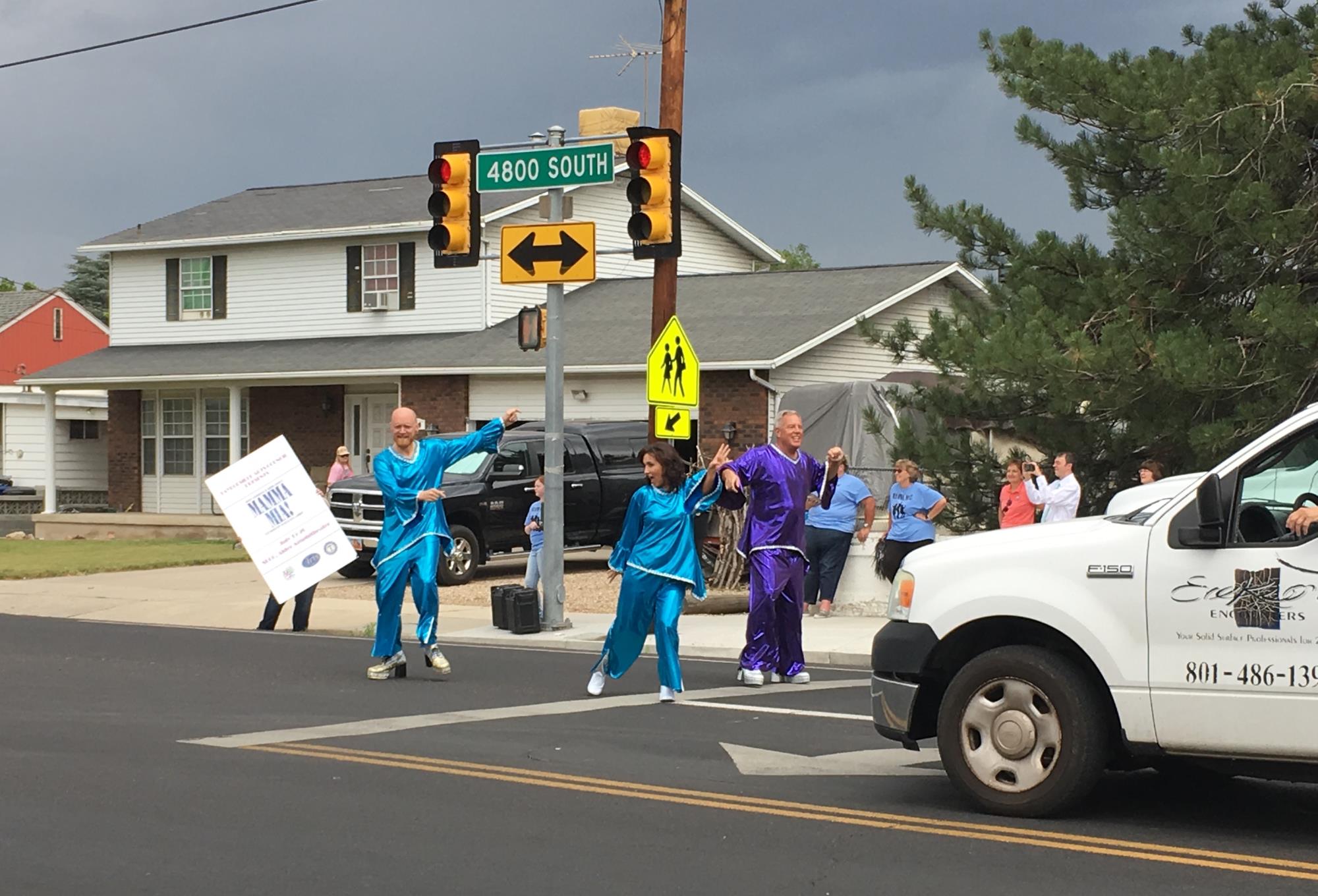 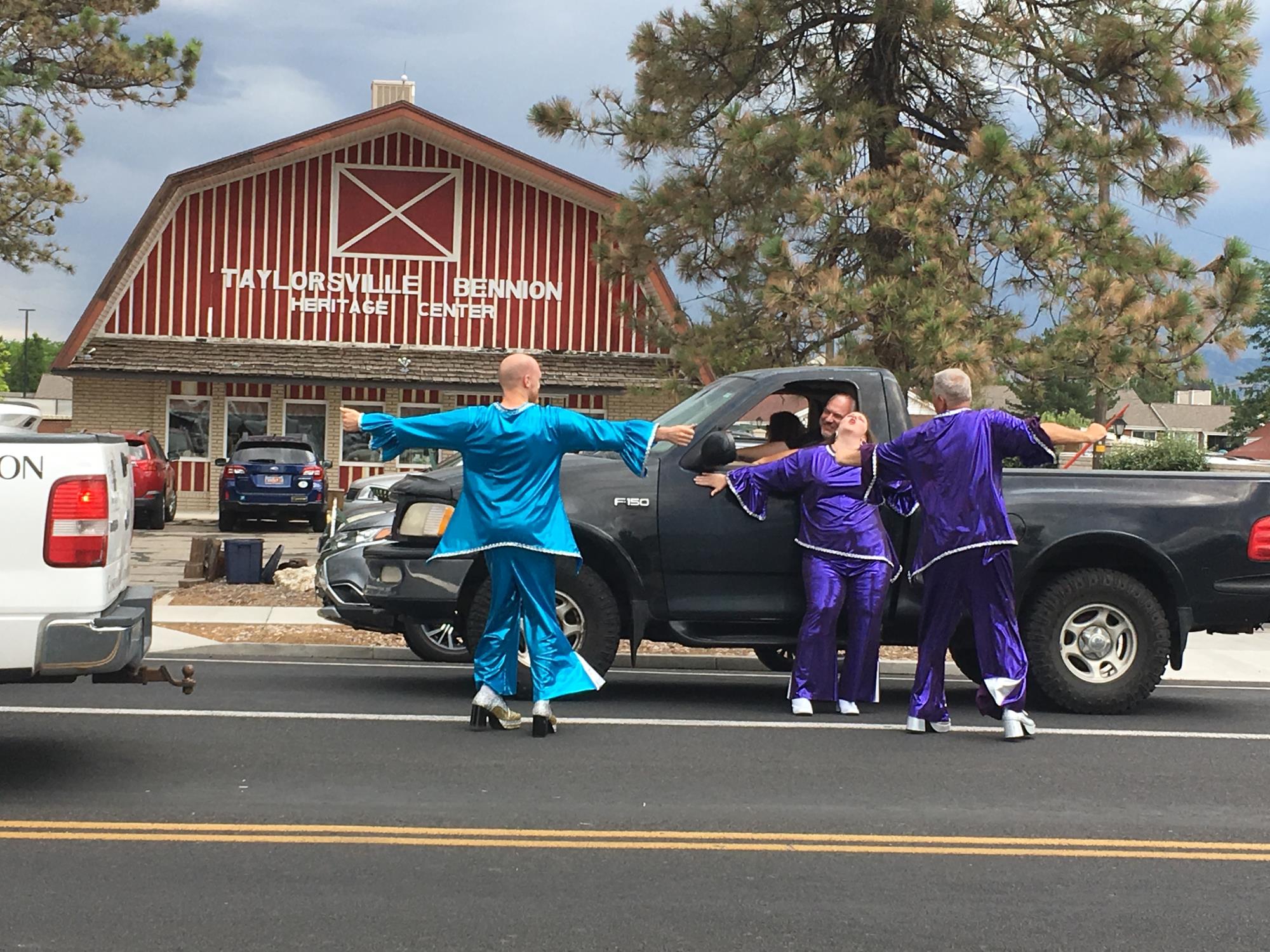 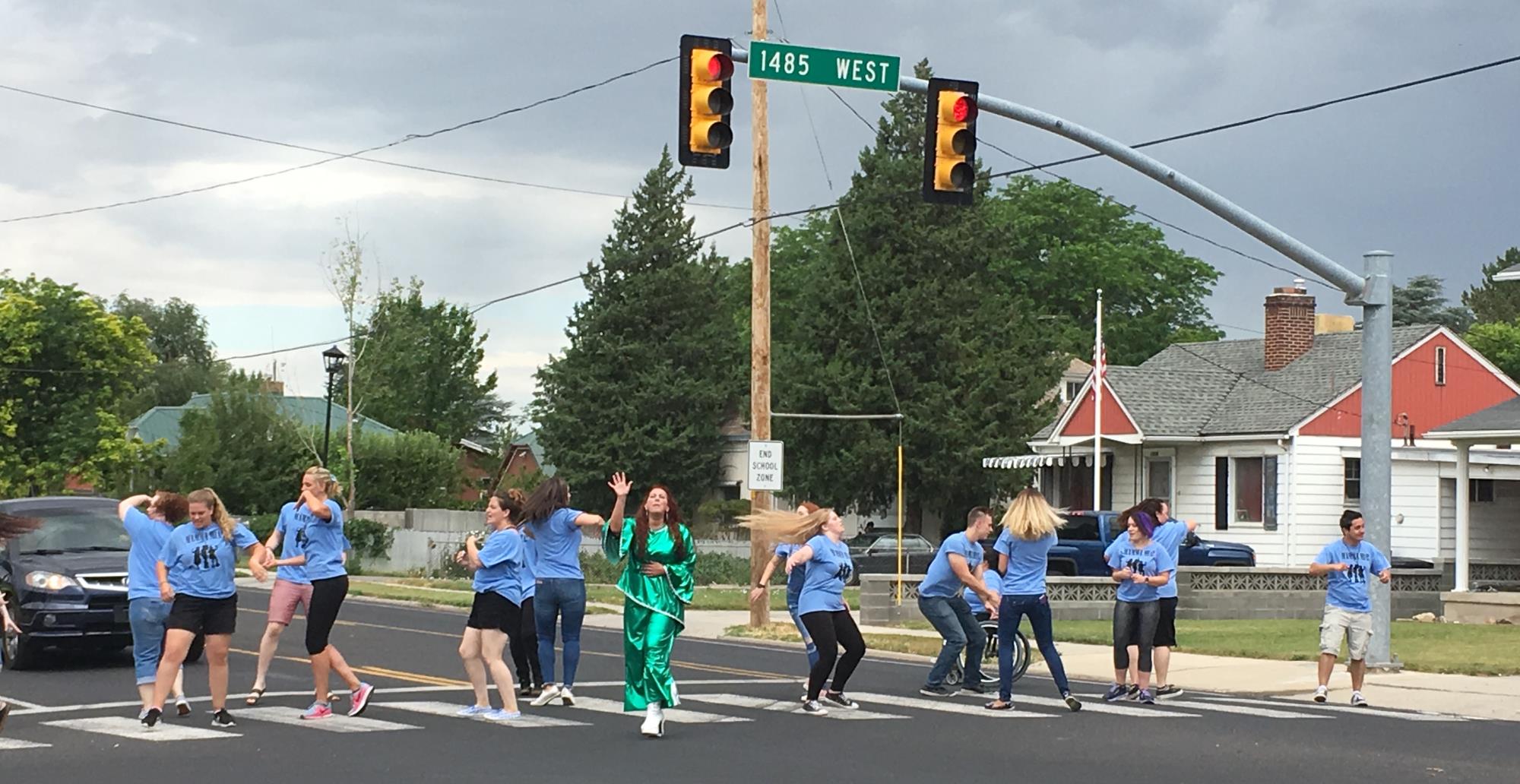 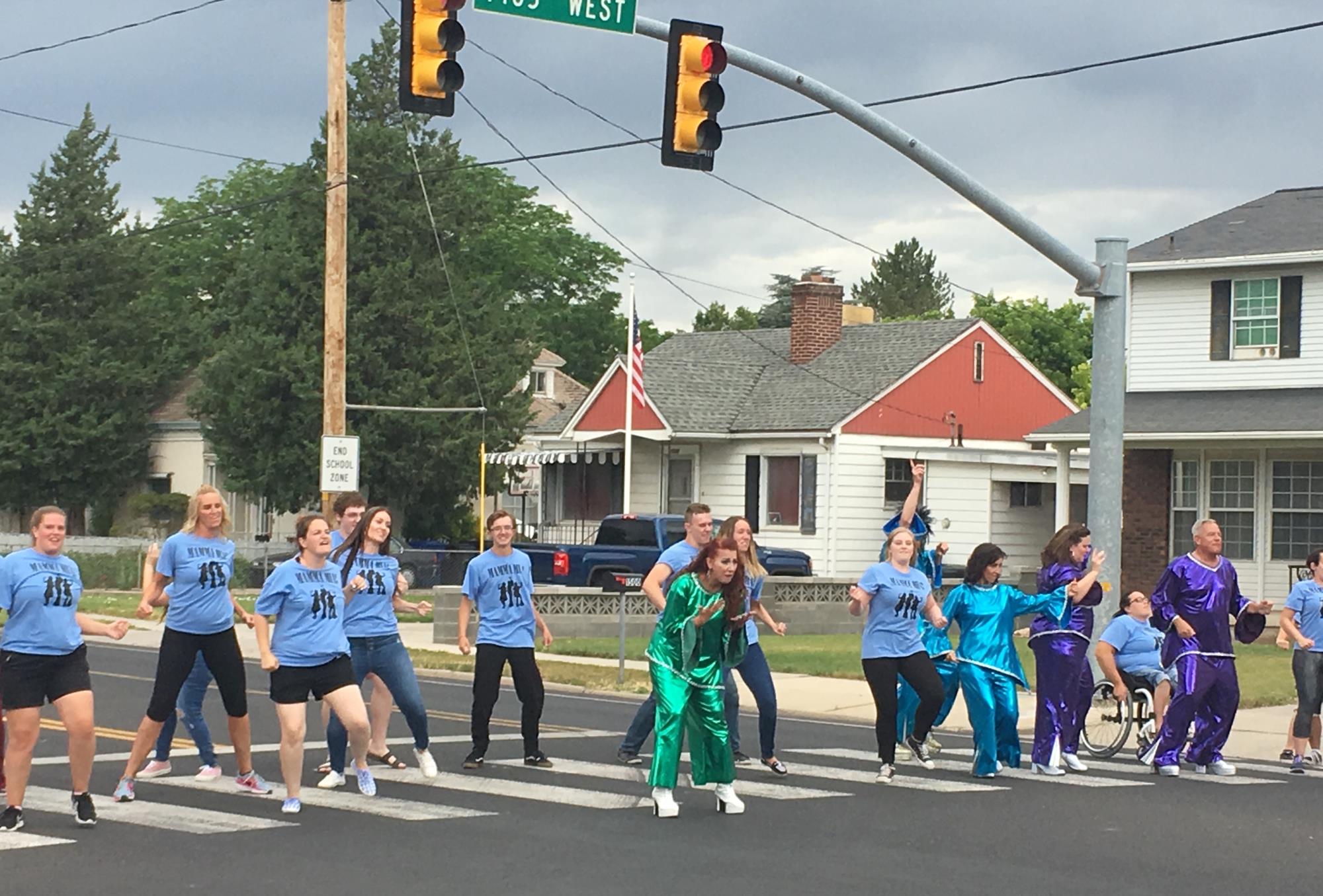 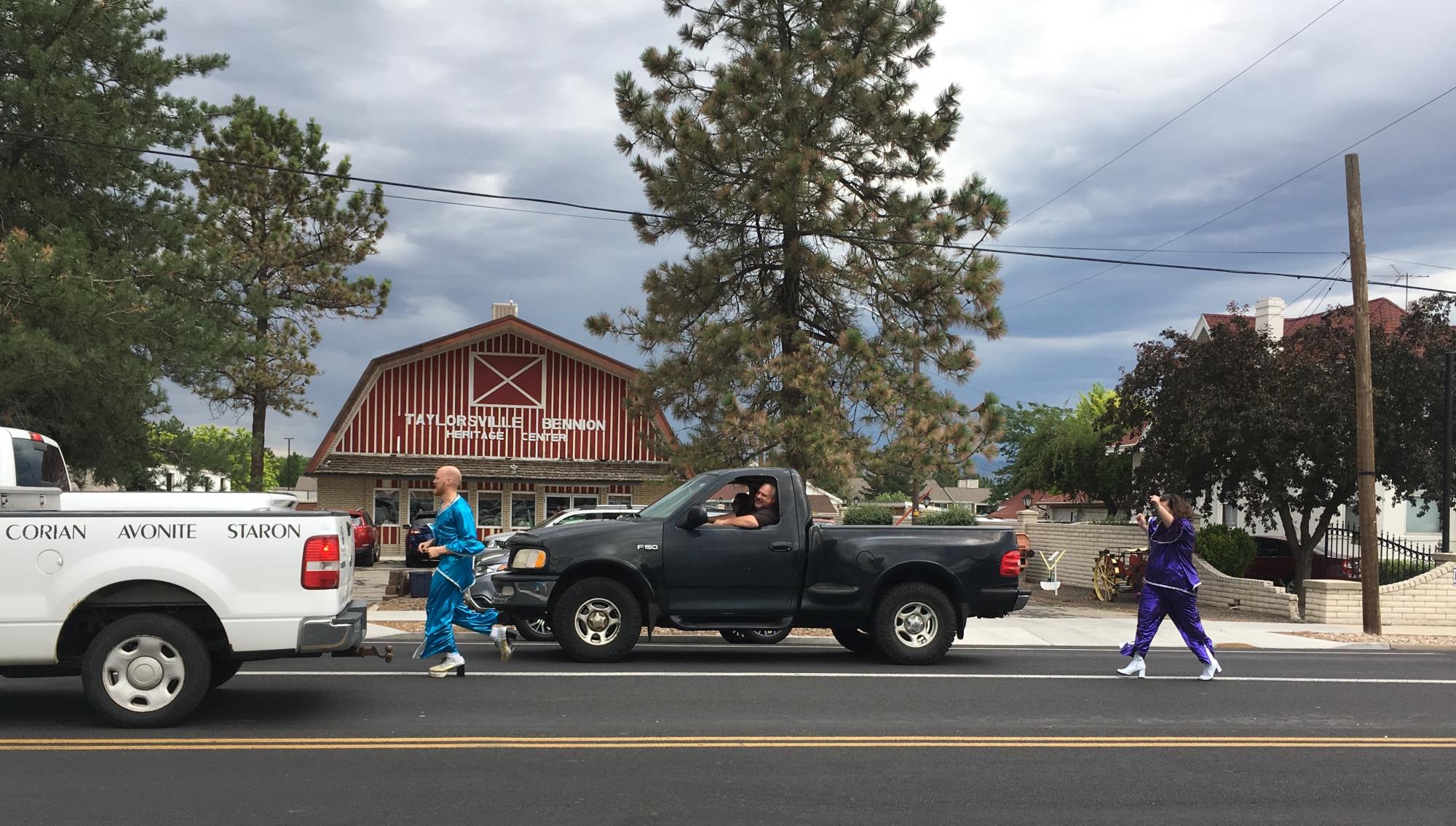